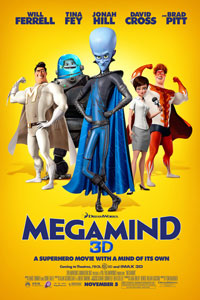 MPAA Rating: PG for action and some language

Plot Summary: Megamind is the most brilliant super–villain the world has ever known… and the least successful. Over the years, he has tried to conquer Metro City in every imaginable way – Each attempt, a colossal failure thanks to the caped superhero known as “Metro Man,” until the day Megamind actually defeats him in the throes of one of his botched evil plans. Suddenly, the fate of Metro City is threatened when a new villain arrives and chaos runs rampant, leaving everyone to wonder: Can the world’s biggest “mind” actually be the one to save the day?

Cats And Dogs : The Revenge Of Kitty Galore
Alpha and Omega (2010)
Legend of the Guardians: The Owls of Ga'Hoole
Tangled