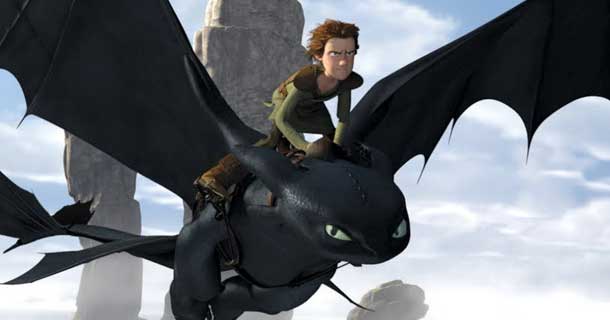 DreamWorks Animation SKG, Inc. has announced plans to bring the epic action-adventure of Hiccup and his courageous Viking tribe as well as Toothless and the other beloved dragon characters on the Island of Berk back to the big screen in 3D with the sequel to How to Train Your Dragon in 2013. The second chapter to the critically acclaimed 2010 blockbuster, How to Train Your Dragon – which has grossed nearly $500 million at the worldwide box office – will again feature the all-star voice talents of Jay Baruchel, Craig Ferguson, America Ferrera, Jonah Hill, Christopher Mintz-Plasse, TJ Miller and Kristen Wiig. The sequel is being made under the creative guidance of Dean DeBlois, Chris Sanders, and Bonnie Arnold. It is written and directed by DeBlois and produced by Arnold. Once again based on the book series by Cressida Cowell, the sequel is executive produced by Sanders and DeBlois. “Nothing could be more exciting for me than being charged with carrying this story forward, into the unknown reaches of Hiccup and Toothless’ ever-expanding world,” commented DeBlois. “Ambitions are high with this epic next chapter, and together with an incredible team of filmmakers, we plan to build upon How to Train Your Dragon’s originality, boldness and heart, in hopes of once again touching audiences around the world.” “Dean, Chris and Bonnie each has a fiery passion for How to Train Your Dragon that combined is serving as the driving force behind the very bright future of DreamWorks Animation’s newest franchise,” said Bill Damaschke, Co-President of Production for DreamWorks Animation. “Having them on-board to lead the creative team and having our cast return to tell the next exciting chapter is a dream come true for the studio… and the first big revelation of our feature film line-up for 2013.” How to Train Your Dragon,the tale of a young Viking named Hiccup who defies tradition and befriends a dragon, has impressed critics and mesmerized audiences around the globe. Among the top ten films of 2010 and one of the best-reviewed movies of the year, How to Train Your Dragon is scheduled to be released on DVD and Blu-ray on October 15, 2010.