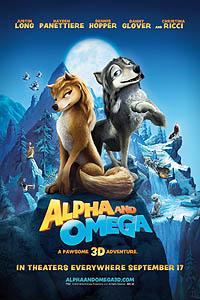 MPAA Rating: PG for rude humor and some mild action

Plot Summary: What makes for the ultimate road trip? Hitchhiking, truck stops, angry bears, prickly porcupines and a golfing goose with a duck caddy. Just ask Kate and Humphrey, two wolves who are trying to get home after being taken by park rangers and shipped halfway across the country. Humphrey is an Omega wolf, whose days are about quick wit, snappy one-liners and hanging with his motley crew of fun-loving wolves and video-gaming squirrels. Kate is an Alpha: duty, discipline and sleek Lara Croft eye-popping moves fuel her fire. Humphrey’s motto – make ‘em laugh. Kate’s motto – I’m the boss. And they have a thousand miles to go.

Back home rival wolf packs are on the march and conflict is brewing. Only Kate and Humphrey can restore the peace. But first, they have to survive each other.

Cats And Dogs : The Revenge Of Kitty Galore
Legend of the Guardians: The Owls of Ga'Hoole
Megamind
Tangled